Franceschini is a well-established business in Spilamberto and throughout the province of Modena.

This is specifically due to the experience gained by the founder, Gino, who started the business in the mid-1960s and during its development, took care to pass on the knowledge, skills and, above all, those intangible values that make the difference, especially when offering a service to the customer, to his children who would accompany him on this adventure.

Passion and dedication are indeed the key principles that guide Franceschini’s philosophy and succeed in bringing this company to a remarkable level of excellence. This can be seen in the courtesy and helpfulness of the sales staff, as well as in the quality of the raw materials and the wide variety of cold cuts and sausages on offer to customers.

Franceschini is also known for its sale of pork cappello del prete and other specific cuts of meat, suitable for making classic traditional Italian dishes.

Characterised by a triangular shape reminiscent of the typical headgear worn by prelates and influencing its name, cappello del prete is not only one of the most widely used cuts of meat in Italian gastronomy thanks to its versatility, but it is also an excellent sausage.

This particular sausage, which is considered in all respects a precursor of cotechino, is a typical speciality of the Parma and Piacenza areas. It is a truly excellent product, which therefore finds its place on the table for special occasions.

It is generally accompanied by a side dish of mashed potatoes and lentils: it can obviously be served on New Year’s Eve, but also throughout the winter period up to Easter. There are several cuts of pork inside it: from the shoulder to the jowl, from the rind to a percentage of good fat, which are all ground together to obtain a medium grain.

At this point a number of key ingredients are added to create the typical profile, which include salt, pepper and crushed garlic. It is then left to macerate in white wine. 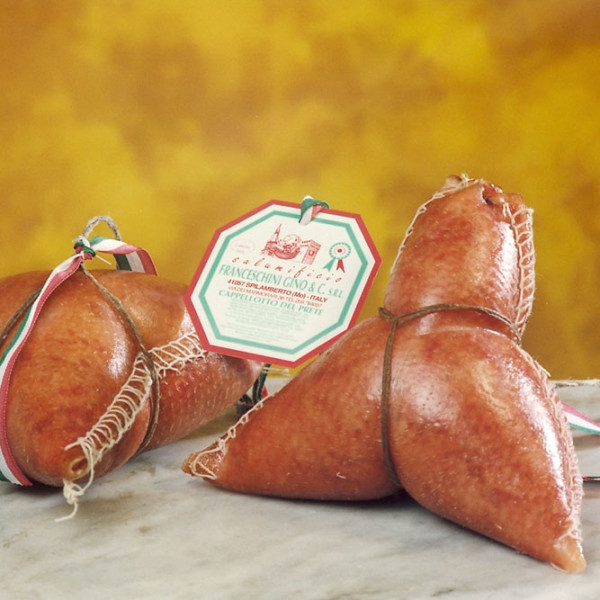 Rely on Franceschini, an expert in the sale of pork cappello del prete

If you are interested in buying this excellent and originally shaped sausage, Franceschini is a guarantee in the sale of pork cappello del prete.

Contact us to discover this typical regional Italian speciality that will enhance your winter lunches and dinners, impressing your guests with a homage to tradition. We will also be able to recommend excellent food and wine pairings to make your dining experience absolutely perfect.

Go to the product sheet
Go to Top